I did not know what to think about the Danish cartoons much. First of all, when you look at them, it is really hard to be sure whether the author meant them to be offensive at all. Second, well of course, I am too much reader of The Voice of the Martyrs to take seriously Islamic complaints about how Christians are disrespectful to their faith. I really shouldn’t dig into the reports of VoM about situation of Christians (and especially new converts to Christianity) in Pakistan or Saudi Arabia, should I? However, nothing of that seemed interesting enough to be written down and I didn’t have a time and urge to research this thoroughly. Meanwhile, all what I wanted to say was written in much better way and with true understanding of what’s going on by HonestReporting.com. And, just one example—Tom Gross’ selection of Arab Cartoons.

However, I know that the reasons for many social actions do not lie in the rational causes, but in the symbolic struggle for status and support. So, it seems that Honest Reporting’s (which is really strange name) suggestion, that this case Islamic fundamentalist struggle to affirm their support lovely collaborated with their governments effort to find some other enemy than themselves. How lovely.

Thanks Mark for pointing me to the Honest Reporting site.

One off-topic comment. While looking at the Tom Gross’ website I found that it contains a lot of highly controversial and critical material. However, his articles on Roma sometimes get closer to the skin, than feels comfortable. I have never heard about Milena Hubschmannová, which is shame and I just like this picture. 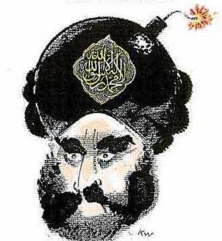 I have decided to publish here the one picture—the most controversial one, not because I would like to offend muslims, but because I really believe that this picture is actually quite interesting and it can be interpreted in many other ways than just the one selected by protesting Moslems and almost all Western print.