After return from Guadec I was greatly encouraged by the interest I've met there. I thought on the spot about making a specific child object for Gnome bugzilla (similar to MozillaBugzilla), which would liquidate unnecessary buttons from bugzilla. However, another request I've got was from Luis and he asked me to get an ability to eliminate unnecessary buttons so he can use bugzilla for his MoFo legal work (which is an interesting idea in itself ;)).

In the end I have decided that it would be actually easy to keep all business logic still in JSON file (and not having some if (this.hostname === "bugzilla.gnome.org") hardwired in the code). So with the current (git, unreleased) version you can add this bit of code into configData of your JSON file:

and the script will kill element with id 'stocklinks' upon the startup. For Luis, instead of one string, it could be an array with more IDs. So this is the current look of bugzilla.gnome.org in my Firefox 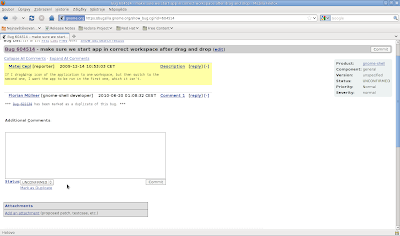 However, while testing the script I found that bgo is still very heavily modified (although apparently not an obsolete one anymore) and my script breaks somewhere. I have fixed one inconsistency (apparently, 'mailto:' is not good enough for their email addresses ;)), but there is still something which breaks generation of new buttons. I'll work on it when I can.