The great Firfeox 4 is out, and the official version of bugzilla-triage-scripts is broken for you? I am sorry. I have a workaround for you, and working on the final solution of the problem.

Let me explain what’s going on in the back office:

I have rewritten most of the code (almost no line went unseen). The main change is that we are now using the official (not available when i wrote the first version of the script) page-mod module. This required a lot of work,  because page-mod provides isolated content-scripts which cannot get directly to the main script (which has chrome-level privileges), but they can only communicate in a very restricted manner with the main script via messages. On the other hand set of content -scripts share the same namespace, so inside of the scripts the situation is much more simple. Aside from using the official environment instead of my own hack (which I used before), the main advantage is that the chrome-privileged part of the script is isolated from code of web pages (and in the future it will be working even with Electrolysis), that it should be possible to create unit tests for testing the script (which would be awesome, my constant manual going to one particular and hoping that's good enough testing is ridiculous; I have tried it and it worked with much more simple script for mass-closing of multiple duplicates at once). While going through whole code, of course massive amount of small bugs and typos was unearthed and fixed. I was working so that I should be ready to release FF4 compatible version of my script in the same moment FF4 would be released. However, then something happened … Ehsan Akhgari continued to work on his (mostly b.m.o targetting) scripts, and this time I have managed to get into contact with him, and started to work on including his modules into mine. So, in the end I cannot release 1.0 version of my scripts yet (which I hoped to do), because they don't have enough testing and they don’t most of the stuff i would like this release to have. However, given that my original scripts (of FF3.* era) are now completely broken on FF4, I have decided what I have (without the Ehsan’s code), and so I have no three official versions of my script: 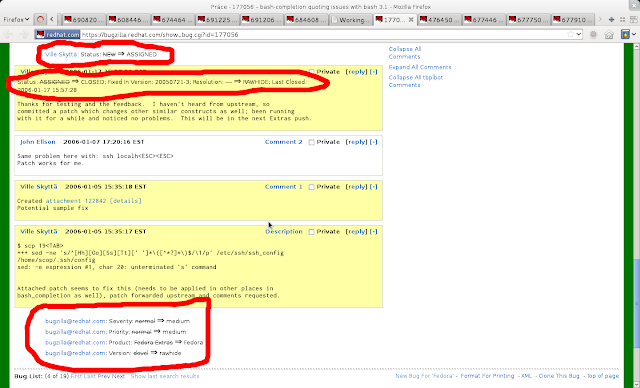 In the end I would need to introduce all functionality contained in Ehsan’s original scripts (also described here). Updates are not working currently (if anybody is able to troubleshoot, any ideas are welcome), but go and install and use the script.