I am a big fan of Gajim, XMPP client and for years I have followed its latest development versions with my packages. Unfortunately, gajim’s development is tracked in a Mercurial repository. Please, understand correctly, I have nothing against Mercurial (and I am apparently not alone), the first version of bugzilla triage scripts were hosted in the Mercurial repository. However, this experience taught me two things. First of all, my head is probably irreparably damaged by git, so I couldn’t get my head around randomly occurring multiple heads constantly erupting in my repository. I was constantly battling with it and generating nonsensical commits just to get rid of them. I never felt like pushing mercurial to the background just to work for me, in the same manner git already worked for me. However, the final nail to the coffin of my efforts to domesticate Mercurial was when I found out that the Jetpack repository itself will be most likely hosted predominantly on github. So, I have mirrored for years gajim repository on gitorious, and I was not that much surprised when I read today’s blogpost about mirroring mozilla-central in a git. However, I was reminded about Hg-Git plugin. Chris reminded me again about the problem that I need to run git checkout -f from time to time to clean the repository. I was also tickled by the idea of stable commit IDs. The idea that two git repositories converted from the same hg one would be compatible was interesting. However, I haven’t found hg-git that awesome:

And of course, if this script is in $PATH, then git suddenly knows about git hgimport command. Does anybody out there knows about some better comparisons between hg-fast-export and hg-git?

So, looking at interesting presentation on Wordpress APIs, I have hit on this slide: 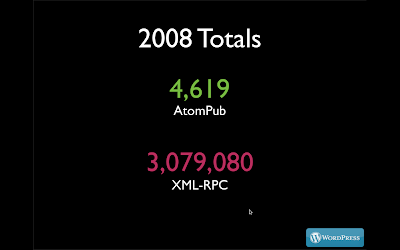 Am I allowed as a friend of Atompub to feel depressed? What happened to the promised world domination?

On the related atompub and depression combination? I have a file with my complete blog in Atom format …