I have started to work on updating pastebin.vim so that it works with fpaste The result is available on my GitLab project vim-sticky-notes Any feedback, issue reports, and (of course) merge requests are very welcome.

I have done a little bit of work to make gedit fully working in RHEL-7 (appropriate packages with almost all my fixes will be most likely available in the next minor release of RHEL-7). Generally my feeling is that gedit is a way less powerful (and writing Python plugins more …

Another Git based issue tracker

Just as a follow-up to my blogpost about the distributed issue tracking, I have just found out there is another one (this time not only dead, but also not even claimed to be finished) system, gaskit.

Scrapping of the Google Groups

As a followup to my previous rant on the locked-in nature of the Google Groups, I have created this Python script for scrapping the messages from Google webpages.

Thanks to Sean Hogan for the first inspiration for the script. Any comments would be welcome via email (I am sure you …

I have created a simple Python package cucutags for parsing behave feature and step files and vim plugin for jumping from feature file to appropriate step (using normal Ctrl-]). Creating similar plugin for other editors (especially Sublime Text) able to cooperate with Python module should be trivial as most logic …

Couple of thoughts on Zarafa

I have mentioned in one internal email discussion (yes, on the fabled memo-list) that I have my emails in Zarafa run by me on my own server down in the living room. And one of my colleagues asked me for some comments on IRC. After we have chatted for a …

All packages are in and waiting on Bodhi making them available.

You can read upstream release notes, watch the release video, or (if you have enough time) browse through closed upstream tickets.

One of the things which surprised me very much when using Gnome-shell on regular basis (which I have been doing with interruptions for more than the last year) is how pleasant experience is to use Gnome-shell for rodent haters. As I am used to the trend that software tends to …

(except it has been part of Fedora 15 for some time already). It is crazy, it is radically new, and I like it more than I expected. Try it! 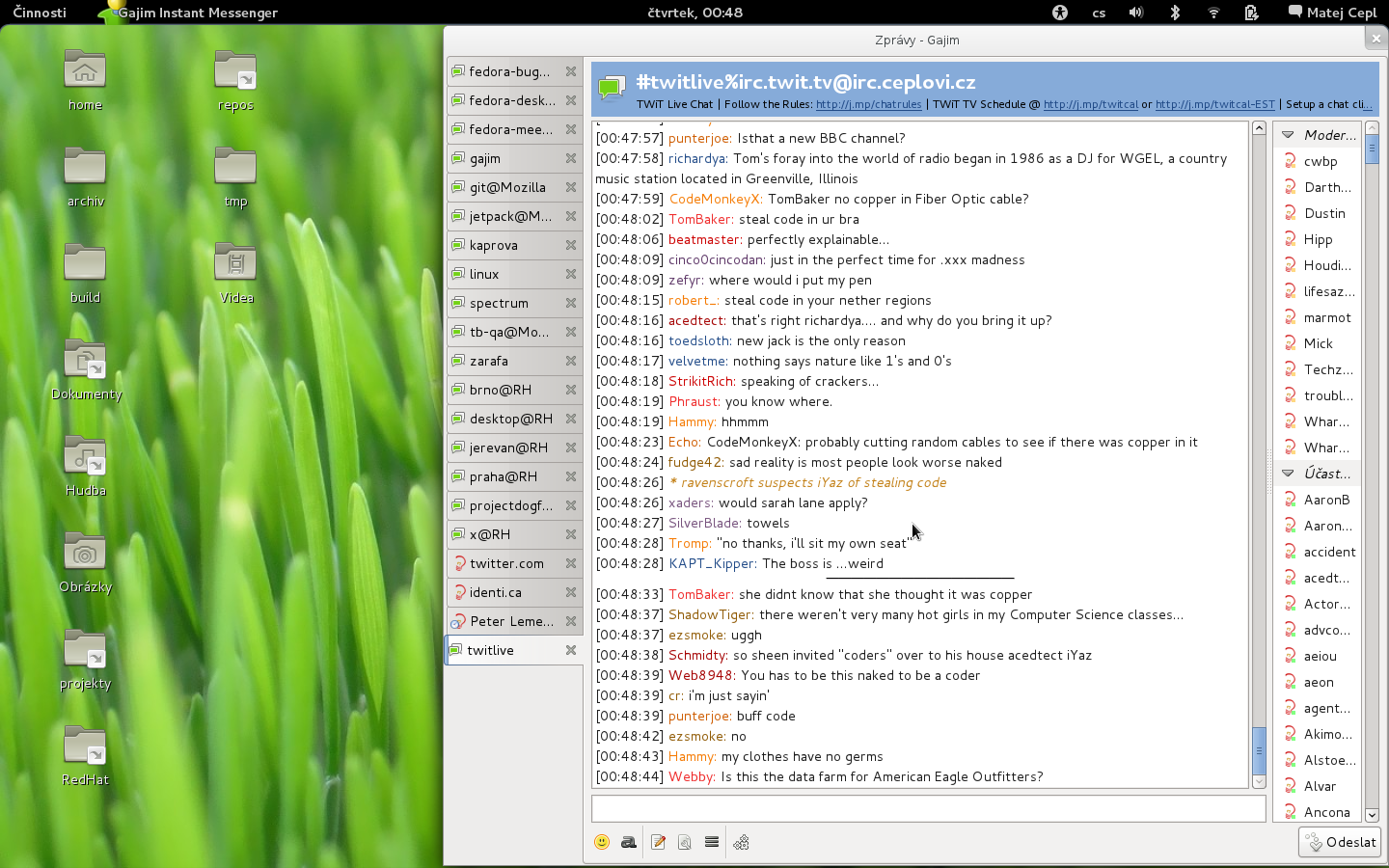 Just so that other name won’t win!

Second and third post go to Bonnet and Verne. I could imagine nice 19th century artwork for it. When looking for examples, I was again surprised how great are proposals for the Fedora artwork and how bland and boring are then quite …

Living in the avalanche … or unexpected results of one bit

While fighting with my bugs couple of months ago (around a F14 Beta, IIRC), I got annoyed by number of bugs waiting on being eliminated in EOS with unreplied needinfos. When going through them I discovered to my unhappy surprise that many of these automatically created bugs don’t have …

While listening to the old issue of The Git Minutes podcast, I was again reminded about the possibility of the distributed issue tracking. Albeit I have grown to be persuaded that the issue tracking has to have available web input (because “normals” won’t file bugs via git) and tried …